Update: The Swedish Granary, formerly attributed to the Swedes of the New Sweden Colony of the 17th century, was built in 1783, not ca. 1650, says the Tree Ring Project 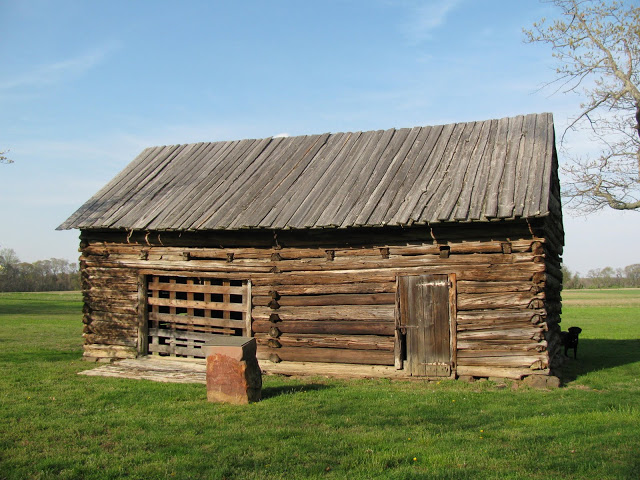 Readers of this website already know that the Swedish Granary is a 14′ X 30′ log building that once stood on the Fralinger farm in the Dutch Neck area of Lower Hopewell Township.  In 1973, the architectural historians G.E. Brumbaugh and A.F. Ruthrauff pronounced the building to be of Swedish provenance, related to the New Sweden colony of the 17th century.  In 1975, it was moved to its present site behind the Gibbon House where it has been a popular exhibit evocative of the colonial period when Swedes and Finns first settled southern New Jersey.

Faced with the building’s preservation issues, Cumberland County Historical Society decided to try to determine its age using tree ring science or dendrochronology.  Two successive project grants were awarded by the New Jersey Historical Commission in 2014 and 2016.  These grants enabled a sustained research project conducted by dendrochronologists Prof. Ed Cook and Bill Callahan. Having ascertained that the Granary was made of Atlantic White Cedar logs, both men–using special boring tools–extracted many core samples from a wide variety of house timbers, logs, and living trees, all of Atlantic White Cedar wood.  These samples were then processed: tree rings were measured and cross-dated both within and between timbers, logs, and living trees, thus rendering the calendar-year dated master tree-ring chronology needed to exactly date the Granary.  Over time–more than 2 years of time, in fact–several master chronologies were created which by December 2016 were sufficient to date the Granary.  That date is not from the 17th century as Brumbaugh and others had speculated, but rather 1783-84.  For a narrative of how Cook and Callahan came to their conclusion, please refer to the “Dendrochronology Report” link below.

What does this mean for our beloved Granary that presumably now belongs to the Federal period?  It means that CCHS will now undertake a thorough reinterpretation of the building, using a variety of approaches: title searches, archaeology, close analysis of construction details, and so on.  This effort has already begun.

Some might question whether the Society has lost something in having the 1650 date overturned.  I don’t believe so.  In fact, much has been gained in the process of carrying out the project.  We have learned much about Atlantic White Cedar and its uses in our region; about the many buildings visited and explored, both log and timber-framed; about the people who own such buildings; and about the unique physical environments where the cedar trees live.  From my point of view, the project has been a long process of discovery, one that I intend to describe in the near future.  For now, we may have lost a legend, but gained a fact that may turn out to be a better foundation for a new legend.

Some may think that the new date has compromised CCHS’s connection to the New Sweden colony. That is debatable, since log construction will always be associated with colonial-era Swedes and Finns.  Furthermore, southern New Jersey along with the entire Delaware Valley will always have its New Sweden history.  In fact, the project shows that CCHS takes that history seriously.  In tying together log buildings throughout the region, the project has improved the quality of information about the New Sweden period.

So whichever direction CCHS is led in in its research for a new interpretation, there is the feeling of a new beginning in the quest to pierce this building’s abiding mystery.

On Sunday, May 7, 2017 at 2 PM, at Lummis Library, one half of our dendrochronological team, Bill Callahan, will present a seminar on the Swedish Granary Tree Ring Project and on the “Dendrochronology Report” that he co-wrote with his partner, Dr. Ed Cook. The seminar is part of our lecture series, so the public is invited at no charge.  In preparation, please read the report linked below. While much of the report is for the general reader, some of it will be difficult for most non-specialists.  But, please do the best you can and bring your questions.  It should make for a fascinating presentation.  Bill may be joined by his partner, Dr. Cook.

Thank you for your interest in the Granary and this project.  We trust you will continue with us as we try to understand this inscrutable building.  Feel free to contact the writer of this update, Joe Mathews, at Lummis Library.   And, as usual, stay tuned.