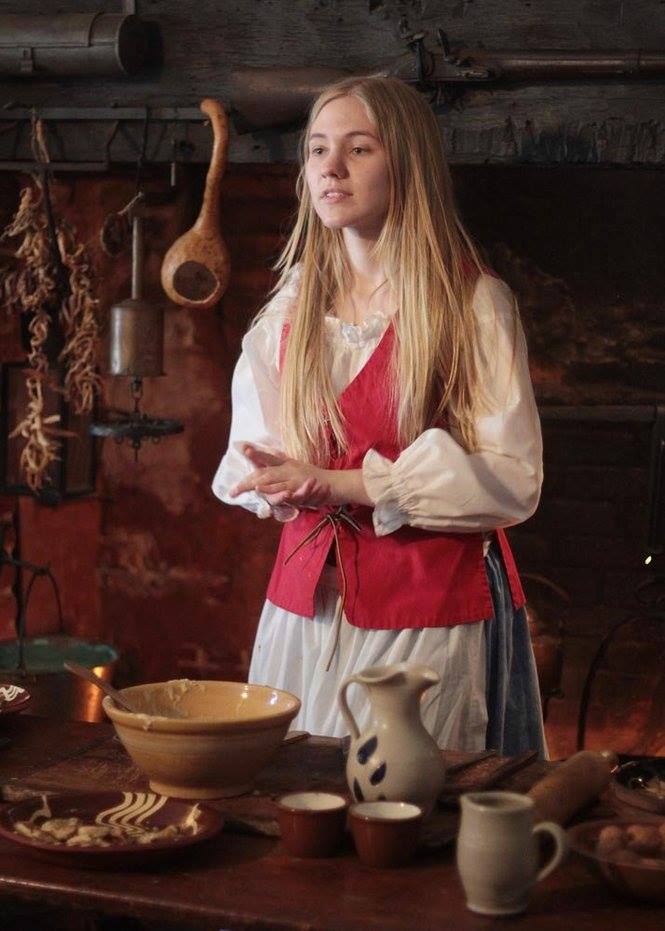 You might not go to school. If parents knew how to read, they taught their children how to read from the Bible. The first free school in Cumberland County was built in 1811 on Ye Greate Street where it still stands.

You would start working for your family at a young age. Kids worked along side their parents from sun up to sun down.

Very young boys might throw stones at birds to protect the crops from being eaten. Older boys would weed, herd sheep and goats and work along side their fathers. Girls might sew and keep house and do the same chores their mothers did. Sometimes children were sent to another household to “apprentice”, or learn another trade.

Your bed might be a sheet stuffed with straw or feathers on a dirt floor. You would roll it up in the morning to store it out of the way. You might share the mattress with many brothers or sisters. Your parents might sleep in a high bed with curtains to keep the heat in. Nobody had much privacy.

In nice weather you might bathe in a stream or lake or the Cohansey River. In winter you probably bathed in a large tub in front of the fireplace in the kitchen. You wouldn’t do this often because it is hard work to draw the water from the well and heat it. People didn’t bathe much so they smelled bad. Twice a year was enough for baths.

As a Colonial child you would eat your main meal in the middle of the day. You might have to stand when you ate. Chairs were for adults. You might have a knife and maybe a spoon but no fork because they were new tools and expensive. It was all right to eat with your fingers. Many people ate off wooden plates called trenchers. You might have to share. Pewter plates and mugs were for the very rich. A drinking mug was called a “drinking pot”. You might use a large cloth napkin for wiping your fingers and mouth.

While you would be very busy doing chores, you still would have some time to play. Several of the games we play today are based on the games played in 1700’s. Some of the favorites were hide and seek, marbles, blind man’s bluff and jump rope. Can you find others?

You would be taught to obey your parents and never question anything they told you to do. Children had to be quiet when grown ups were around. You probably curtsied or bowed to an adult when you saw them and always were respectful.

While very young both boys and girls wore dresses. At around age 6, you would start to dress just like your mom or dad. You would have very few clothes.

b.    Live in Colonial Times

d.    Be a Tea burner from Greenwich, Shiloh, Bridgeton or Fairton.

e.    Cook in a colonial fireplace.

3.    Write a letter to Pirate John or a thank-you letter to the interpreters or guides.

Use problems such as –

Calculate how old the first house in Greenwich is (1686) or what anniversary of the Tea Burning it is?

1.    draw a picture of something you saw in Greenwich

2.    Make a simple quilt for a wall hanging (each child could make one square that would include his name.)

3.    Make a simple cardboard loom (notch sides and use yarn for weaving.)

4.    Collect herbs, bark, berries or other things that could be used for dye. Dye cloth or try tie dyeing.

5.    Make a clothespin doll from round headed clothespins. These may be cut off at the bottom so they will stand. Use pipe cleaners for arms. Paint faces and Make simple clothing for Indians and Colonial ladies. Use cotton or yarn for hair.

Write a play and produce it.

1.    Do research in your library identifying colonial songs. Sing Revolutionary or Pre-revolutionary songs.

3.    Dry fruits and vegetables in the sun (solar energy is not new)