The Mystery of the Buried Box

The Cumberland County Historical Society received a donation in November of a small little metal box (2.25 in x 1.25 in ), with cards in it for a Tak-A-Tik company in Bridgeton, NJ that was owned by Isadore William Goldberg. This small little box found buried in the ground led us to learn more about individuals and businesses in Bridgeton that we are excited to share! 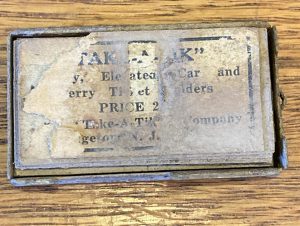 Who was Isadore William Goldberg?

On October 18, 1888, Isadore William Goldberg was born in Rahway, New Jersey, to Russian-Jewish immigrants Max and Esther. Isadore was the eldest child out of seven children. His siblings, from oldest were Katie, Minnie, Ida, Maurice, Gertrude, and Rose. By 1905, the Goldbergs were living in Bridgeton, New Jersey. Three years later, Isadore married Katherine Goldberg of Bridgeton at Atlantic City on November 15, 1908. Together they had four children, Margaret, Bernice, Susan, and Joseph. Sometime between 1941 and 1946, Isadore married a second time, to a woman named Marion.(1)

By 1905, Max owned and operated a variety store in Bridgeton, New Jersey at 42 E. Commerce Street. Isadore worked for his father until about 1914 when he started the Gastine Company. Around 1914, Isadore had opened up his own shoe shop on 31 South Laurel Street, he ran his shoe shop while starting the Gastine Company. (2)

Gastine Co. sold gastine tablets that were advertised as being able to save gasoline and remove carbon. Bridgeton Evening News reported that Gastine tablets were exported all over the world – Yemen, China, Philippine Islands, Belgium, Canada, and South Africa. Isadore hired field representatives to further push the product. In September of 1919, Isadore closed his shoe shop – selling all of his stock to an export business. He used his shoe shop as a temporary store for Gastine Company. 31 South Laurel Street only housed Gastine for a month, when Isadore purchased 24 Cedar Street, where the Gastine Company plant was to be constructed and the old school would be used for storage and packaging. The Gastine Company spread across the country and by 1920 the firm planned on opening 200 stores.(3)

In 1921, while running the Gastine Company, Isadore started the Tak-a-Tik Company that manufactured small boxes made of some form of metal that were meant to hold tickets. The patent for the ticket holders was filed on May 12, 1921 and was given patent number 150.619. The company appears to have been short lived as nothing further has been mentioned of it.(4)

When exactly Isadore’s work with Gastine ended is unknown. But by 1928, Isadore had returned to his father’s department store, Goldberg’s Department Store on 37-47 E. Commerce Street. Ads for Gastine Co. in Bridgeton continued to be printed in the newspapers and in 1938 Isadore filed a patent for “…doing business as The Gastine Company.” (5) A Federal Trade Commission Decisions report of July 1, 1950 to June 30, 1951, stated that Isadore was no longer allowed to advertise Gastine – expanding:

Isadore W. Goldberg, an individual operating under the trade name of The Gastine Co., with his principal office and place of business located in Bridgeton, N.J., advertiser-vendor, engaged in the business of offering for sale and selling a product for use in automotive machinery, designated “Gastine Tablets,” in interstate commerce, entered into an agreement, in connection with the offering for sale, sale and distribution thereof, to cease and desist from disseminating any advertising in regard thereto which represents directly or by implication:

Isadore took over his father’s business, after his passing. Between 1940 and 1945, Isadore opened a new furniture store at 114 Broad street. Isadore continued acting as vice president of the store at 37-47 E. Commerce. Isadore died in Miami Beach, Florida on February 15, 1952 at age 63. The stores that became a family business continued to operate after Isadore’s death. (7)