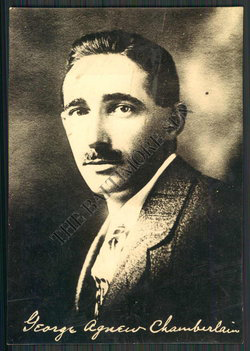 Come and discover the thirteen forgotten novels about South Jersey by George Agnew Chamberlain, plus his one other South Jersey novel published under the pseudonym Michael Brandon. These forgotten novels have a historical basis. They range from horse stories to a psychological thriller. Having written eleven previous novels and one non-fiction book he wrote his first South Jersey novel in 1923. Highboy Rings Down The Curtain was published by the Bridgeton Evening News. His last South Jersey novelette was Lord Buff and The Silver Star in 1955. Several of these novels were made into Hollywood movies with famous actors. Chamberlain’s writings of South Jersey and its Barrans are colorful, descriptive and paint a vivid picture of the area where he lived for thirty-seven years. His characters portray the people as they were at the time he wrote their story. There are several other published and unpublished South Jersey stories to be discussed plus exhibits.

He and his family relocated to Alna, Maine where they lived for sixteen years. While there he was part of the Alna Historical Society and helped for the Wiscasset, Waterville and Farmington Railway Museum. As curator he authored the book The Narrow Gauge Railroad in Alna, Maine, published in 2009. As a member of the Broad Street Cemetery Association he wrote and published the book, Broad Street Cemetery-Bridgeton, NJ – A History 1791-2013 and Guide. He has researched and hoping to publish a book about the Civil War Veterans buried in the cemetery. Jim also has three currently unpublished books. One is about a local Alna boy who became a physician and earned worldwide recognition for pioneering bone grafting. Another book is about the history of the one-room schools in Alna and his last is a biography of George Agnew Chamberlain, local author and diplomat. His biography called Go as You Please has involved researching family papers, interviews and gathering information from foreign countries. Bergmann has given talks about Chamberlain, the Cumberland Nail and Iron Works, and the Bridgeton City Park.

Jim and his wife Mary Ella have been married 60 years and have two adult children and two grandchildren. His interest in history began in high school and since his retirement in 2000 he has been able to collect local history and write about various subjects.