An Ancestor of the Salem Witch Trials in Fairfield, NJ: Rev. Noyes Parris and the Fairfield Presbyterian Church, 1692-1748

Working in a research and genealogical library, it is common for people to be excited to share their ancestry and the great figures of the past that they are related to. Seldom, though, do you hear of the sketchy individuals lurking amongst the branches of people’s family trees – those family members who have left a black mark in history. While people are thrilled to share the lineage they are proud of, those dark parts tend to be hidden in the notes and sources of the family’s genealogy research. Why? Is it because we feel ashamed of the bad parts of our family history? Do we feel responsible for those actions and those people within our trees that we do not approve of?

In 1724, Rev. Noyes Parris began his service at the Fairfield Presbyterian Church in Fairfield, Cumberland County, NJ. He worked at Fairfield for only a short time – leaving in 1729. During that period he also served on the Philadelphia Synod, a governing power within the Presbyterian Church. His departure seemed to be a hasty one as his absence at a synod meeting on September 18, 1729, was questioned. It was then that the synod was notified that he had “disorderly withdrawn, and gone to New England, under imputation of scandal.” The details of Parris’ scandal have yet to be uncovered. (1)

What Parris thought of his family history is unknown,  although some sources cannot discuss his life without mentioning his father – Rev. Samuel Parris of Salem, Massachusetts. Within Samuel’s Salem household, some seven years before Parris’ birth,  the historical event known as the Salem Witch trials began.

Between February of 1692 to May 1693, Salem, Massachusetts was plagued with hysteria and jealousy that caused nineteen individuals to lose their lives. The birth of the witchcraft accusations occurred in Rev. Samuel Parris’ home when his daughter, Betty Parris, and his niece, Abigail Williams, were having fits that were assumed to be supernatural attacks on them. This conclusion was drawn after the local doctor was unable to diagnose the girls. Three women were accused of using witchcraft against the girls – one of them being Tituba, Rev. Parris’ slave. Throughout the duration of the Salem Witch Trials, over 200 people were accused of practicing witchcraft. (2) 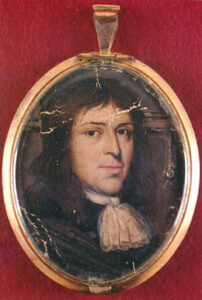 Although the trials seemingly were fueled by fear and the village’s devotion to God, historians have shown this was not fully the case. Salem was divided into three sections – the town, the village, and an area in between – Ipswich. The town of Salem was on the bay and was metropolitan due to its access to trade. The rural village was cut off from the ports and did not have access to the same financial opportunities as Salem Town. The people of Ipswich existed simultaneously in both areas – they were close enough to the town and benefitted from the financial ventures of it and also were connected to the village. Economic rivalry and challenges of societal norms played a large part in the trials and those who either benefitted from the financial success of the Salem town or who unintentionally broke from the norms of society were the most susceptible to being accused of witchcraft. (3)

The financial growth of the town was seen as a threat to the village’s religious piety. Because of the success of the people of Ipswich, many of the accused happened to live there. Women were also vulnerable to accusations – especially if they were older, single, and financially well-off, which led them to be independent. While some men, such as Giles Corey, were accused of witchcraft, the defendants were overwhelming women. (4)

After the trials, the families of the victims who had lost their lives during the trials filed lawsuits against Parris. The village was in turmoil due to Rev. Parris’ presence – he eventually was dismissed in 1697 and moved to Concord, Massachusetts. Two years later, on August 22, 1699, Noyes Parris was born in Newton, MA to Rev. Samuel Parris and his second wife, Dorothy Noyes. Rev. Parris died on February 27, 1720. His death was described as “ …choking in the blood of the witchcraft victims…” in the Biographical sketches of graduates of Harvard University, in Cambridge, Massachusetts, vol. 6. (5)

Noyes Parris attended Harvard University, a school that his father did not finish. After leaving Fairfield in 1729, Noyes returned to New England – serving as Chaplain of the Castle William in Boston. After failing health, he moved to Sudbury to live with his brother, Samuel. Roughly around 1748, Noyes Parris died. He, like all of us, possessed a family history that he may not have been proud of, and for a short time, his lineage connected Fairfield to the Salem Witch Trials.